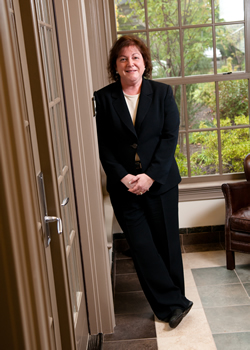 Francine Foner
Attorney Francine R. Foner, Esq. is an associate with Hyderally & Associates P.C. Prior to joining with the Hyderally Firm in 2008; Ms. Foner had a solo practice. After attending Boston University School of Law she obtained her J.D. in 1989. She then began to work with a general practice law firm, Lebson, Prigoff and Baker, LLP. She continued working with the firm for over 14 years. In those years she practiced across many different practice areas which included guardianship, health care law, defamation, product liability, real estate, negligent security, insurance defense, employment law and banking law.

Ms. Foner decided to open her own solo practice in July of 2003. At that time she began to concentrate on employment law. The main areas of employment law she dealt with were wrongful discharge, hostile work environment, discrimination, civil rights violations, and harassment. Ms. Foner became a qualified mediator for the New Jersey Superior Court in 2004. She has had extensive experience mediating many cases dealing with employment law while working with the NJ Superior Court. Ms. Foner is admitted to practice in both state and federal courts in New Jersey.

As an employment law attorney Francine R. Foner has dealt with a wide variety of cases. She is an attorney who represents individual who feel they have been a victim of discrimination in the work place. Discrimination can take many different forms and the goal is to work within the scope of the law to ensure that each work facility is a location that is free from any sort of discrimination. Discriminatory actions have no place in the work place but many times individuals are denied benefits, raises or even a position within a company based on a factor such as age, gender, marital status, race or ethnicity. Employment laws are in place to prohibit any form of work related discrimination.

Many times once discrimination is identified by a worker, whether it was committed against others or themselves, the supervisor or employer will retaliate. Any actions which are deemed to be retaliatory in nature are prohibited by employment laws, both on the federal and the state levels. Francine Foner litigates in cases where there have been retaliatory actions toward a worker. She can also litigate in whistleblower cases where a worker points out a breech in policy or an action which is contrary to the law or company policy.
​
Other areas of Expertise

Ms. Foner is   knowledgeable in employment law and has many years of successful litigation. Harassment is also a common infraction of employment laws that occur in the workplace. If harassment is not dealt with quickly, it can lead to workers feeling like they are working in a hostile work environment. Harassment can take many forms but many times it is sexual in nature. Ms. Foner works with companies to assist them in instituting and enforcing rules regarding harassment in the workplace and helps them design policies which are in place for workers to follow when they feel their rights have been violated. When companies follow these procedures, they can avoid arbitration and court appearances. When they do not follow their policies then Ms. Foner is well able to pursue legal action and seek compensation for her clients.