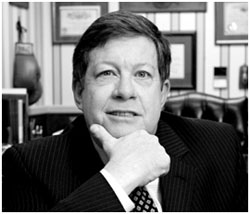 Mr. Garfinkle obtained his J.D. at Hastings Collect of the Law, University of California, San Francisco. After finishing his degree in law in 1978, he began a career as a trial lawyer. For nearly his entire legal career, Mr. Garfinkle has been a solo practitioner. He has focused his legal efforts on criminal defense and plaintiff’s personal injury litigation. His practice emphasizes professional licensure especially as it deals with attorney discipline and legal ethics.

Marc is a member of the American Association for Justice and the National Association of Criminal Defense Lawyers.


Prior to devoting his time to his legal firm, Mr. Garfinkle was an ethics investigator and also served as the chair for the New Jersey Supreme Court DA Ethics Committee. He continues to advise and represent New Jersey attorneys concerning ethics.

Mr. Garfinkle is an Adjunct Professor at the Seton Hall University School of Law where he instructs Persuasion and Advocacy. In Livingston, New Jersey, he continues to serve as the Public Defender. Mr. Garfinkle makes frequent appearances on radio and television in which he speaks pertaining to various legal topics. He also hosts many different radio and television shows in Haitian Creole and in French. These shows address legal issues that immigrant communities continue to deal with.

Marc Garfinkle provides training to many different lawyers across the states. He is a features faculty member at Solo Practice University, Lawline.com and West EduCenter. He provides skills training and legal ethics instruction for legal professionals. He has also presented many different types of coursework to different state bar associations as well as the US Department of Homeland Security.

Mr. Garfinkle has become a prolific and respected writer on legal matters. “Solo Contendere: How to Go Directly from Law School into the Practice of Law without Getting a Job,” is one of his best-selling books. State bars in Colorado, Missouri and Ohio have been licensed to publish their own editions of this popular handbook. He also has several very informative books that have been useful to many legal professionals such as “The Hip-Pocket Guide to Testifying in Court.” This is a practical handbook that can help people who are going to testify in court know what to expect and how to act according to court etiquette. He has an entire series of the “Hip Pocket Guide” books which help provide a wide variety of information on legal matters. This includes the “Hip Pocket Guide to Speaking in Public,” and “The New Lawyer’s Hip Pocket Guide to Appearing in Court.” These are instructional and practical in nature. Aside from published books, Mr. Garfinkle has engaged in many other writing activities such as writing a regular column for the magazine of the California State Bar.

Marc Garfinkle does some public speaking and lectures to younger audiences. He shares on serious issues like sexual harassment, the juvenile justice system, gangs and delinquency. He also judges the John J. Gibbons Criminal Moot Court Competition at Seton Hall University Law School; and the New Jersey state finals of the annual public speaking contest hosted by the Knights of Pythias.